●The Allure of Thatch●

“What is good about thatch?”

This is a question I am often asked. And providing an answer is as hard as
answering a question like, “What is good about a Picasso painting?”
So, when asked, I always fire back with the question, “What is good about your hairstyle?”
Just about everyone has trouble answering that, finally saying
something like, “Well, I think it is because this hairstyle suits me best.”
And because the functionality of a home is of the utmost importance nowadays,
it seems that people who ask the thatch-merit question, yearn for a practical answer,
like, “Thatch keeps a house cool in summer.”

●Thatch is the most eco-friendly roof you can get.

Miscanthus thatch does not produce CO2 at the manufacturing stage. Instead,
it absorbs CO2 while growing. Also, if thatch is procured locally, vehicle-emitted CO2 can
be minimized. Other roofing materials, such as iron ceramic tiles, require heating
at the production stage, so petroleum fuels are burnt, and CO2 emitted. In addition,
many such products are imported from overseas, which also adds to CO2 emissions.
Therefore, “by opting for a thatch roof”, an owner is “fastening into place the CO2
absorbed in the thatch during growing without adding more in the roofing process”.
And even when the thatch becomes waste, it is completely harmless, and can be
returned to the land to make soil, or even burnt because it is carbon neutral, in that
CO2 absorption during growing offsets disposal (burning) emissions to leave a zero-
emission footprint. For the same reason, among carbon-neutral efforts in Europe,
miscanthus and cereal-crop straw already are being burnt as fuel in thermoelectric
power stations.

●Thatch is cool in summer.

Thatch is cool in summer, so there is no need to use air-conditioning coolers in the
home in summer. This too contributes to efforts being made to control global warming. I have heard that
when a thatched roof gets clad with corrugated iron, a bowl of rice left in the kitchen
will soon turn moldy, which is something that never happened when the roof was just thatch.

The origins of thatching are ancient. From the point where humans emerged from
caves, they probably roofed their homes with grasses, seemingly developing them
right into the Tumulus period (mid 3c to late 6c). Some 7,800 years ago, just like now,
thickly thatched houses could be seen, hakogike-jutaku house (dating back to the
year 806), still standing today, bears witness to this.
As I said early, Ise-jingu has had thatched shines for 1300 years.

My personal opinion is that miscanthus thatched roofs can be divided into three stages. 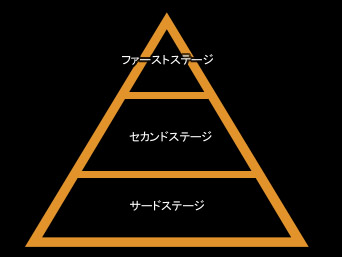 The diagram above illustrates these stages in a pyramid construction. The 1st and
#3rd stages mostly occupy the periods up to the late Edo period, with private houses
being so poorly made that they can be classed in the 3rd stage also. Many private
homes in the towns of the Edo period were thatched, but crudely so.
In modern times, thatching is regarded as expensive ? likewise, in ancient times, it
was expensive too, with only the social classes holding notable assets able to afford
thatching work. Thus, in the 1st stage, assets and power lay behind the construction of
thatched roofs, which were regarded as status symbols by the general public.
Right up to the end of the Edo period, a farming village would have only one splendid
thatched house, the village headman’s. At that time, there was no 2nd stage.

Nevertheless, from the end of the Edo period onward, and into the Meiji period, came an era in which the thatched home was popularized.
What made this thatch status symbol feasible for the masses was the functioning of a “mutual aid system”.
Regionally, these were know by various names, including: “Yui”, “Ko”, “Tanomoshi” and “Mujin”, all loosely meaning mutual association, and functioned as follows.
The inhabitants of neighboring hamlets would form an association of about 30 households that would determine annually the house(s) to be thatched within
their association, with the association providing the miscanthus thatch, the fastening ropes, labor and money to the chosen house(s).
The association would run communal miscanthus pastures that would be cut each year by all the households, with, in some
cases, the thatch being carried to the house waiting to be thatched. Therefore, if you
were a member of such an association, you could be assured that you would receive
a vast amount of thatching material and labor when it was the turn of your house to be thatched, without having hardly any financial burden.
This mutual aid system was a kind of local currency, which did not require monetary interest, and produced items that did not flow outside of the community

Now, housing loans are used. Loans generate interest, and that interest becomes a conduit for the flow of locally manufactured products out to governmen
Through this mutual aid system, thatched roofs became popular during the latter

stages of the Edo period and the entire Meiji period, clearly defining the 2nd stage. During this period, it is said that some several hundred thousand thatched houses
existed across Japan. Today, many roofs classed as 1st stage ones have become
cultural assets. And the thatched houses that still can be seen in the countryside today
are 2nd stage houses built in the late Edo and Meiji periods. Nowadays, hardly any of the
3rd stage roofs can be seen, as they were built only as temporary shelters.

Given sunshine, water and earth, miscanthus grass will grow each year eternally.
This surely was awe-inspiring to the ancient Japanese.
Conversely, other roofing materials, such as iron and ceramic tiles, are artificial, and finite. The rebuilding of shrine
once every twenty years at Ise-Jingu has been maintained for some 1300 years precisely because the roofing material is miscanthus thatch. If iron and grass wer
laid before modern man, he would doubtless choose the seemingly dependable and durable-looking iron without a second though
Yet, the ancient Japanese knew that something soft, vulnerable to water, but “living”, like grass, is, in fact, at heart,
more permanent than iron; and, this was mystical to them. Doubtless, this thinking was galvanized further by the richness on offer in the four seasons of Japan. Spring,
Summer, Autumn and Winter, each marking simple annual cycles such as planting and harvesting that bring joy and gratitude, so that people hoped these tasks would
go on forever. Likewise, people ? vulnerable like the living grass ? took the blessings of sunshine, water and earth in the hope of continuing on forever.

“May this house continue on in peace forever”
Thatch is the “form” expressed by this “sentiment”.

In those ancient times, the Japanese doubtless had a sense of security and a feeling
of pleasure as they stood amidst those eternal tasks. Likewise, when modern Japanese look at a thatched roof, they somehow feel relieved, involuntarily awash with

nostalgia ? the “shape” arousing “sentiment” in a reverse effect.

Will a culture that embraces oil, iron and concrete continue forever? Doubts have been sewn, and modern man is contemplating them.

With thatch, the “nature-linked elements” (sun, water, air and soil) can be taken as the X axis, and the “human-linked element” (engineered by mutual aid) as the Y axis.
And if our planet earth is portrayed using those X and Y axes, and “eternalness” added in the form of time axis Z, a giant universe in a three-dimensional matrix appears.

In Kita-ku, Kobe, stands the Hakogi-sennen-ya (Hakogi family house of a thousand years), by all accounts the oldest private house in existence in Japan.
There the present Mr. Hakogi welcomes visitors all year round
And here I would like to introduce a conversation with Mr. Hakogi. 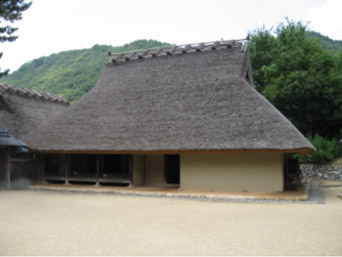 The Hakogi house was reassembled on its present site to make way for flooding of land in a dam project.
One time, it seems a German visitor went home in a rage saying,

“In Germany, the dam project would be halted if there was any plan to flood the land of the nation’s oldest private house.”

Another time, a French visitor also went home in a rage because the only foreign language explanation was in English, there was no French.

Their anger comes from knowing well the importance of maintaining national heritage, and from knowing what it is to lose such heritage.
This is because European history is one of conflict, in which nations invaded, and were invaded. However, in Japan, probably
we are extremely insensitive to such issues.

●Thatch is the path we Japanese have pursued to find “wellbeing”.

A thatched house is not necessarily an easy one to live in.
The interior of a thatched house is laid out like a four-paned window, to give preference
to ceremonial occasions, but that now makes for inconvenience in modern, ordinary
living. Also, for appearance’s sake, such houses were built to be bigger and more splendid than surrounding ones,
which has created an enormous upkeep burden for later generations. These are proving to be large factors causing the disappearance of thatched houses today. Yet, were the Japanese tastes, habits, ideas and way of thinking represented by thatch mistaken? That, including our present stance, will be something determined by future history.
. Ancient Japanese developed their thatched homes with the hope: “May this house continue on in peace forever”, and, so, thatch is a path and a testimony that we Japanese have pursued for “wellbeing”.
I feel a resistance building up against the elements that say, “The path was a mistaken one, thatch does not belong in the modern world.”

There are no differences between past and present. And that is borne out by mankind’s continual challenge in pursuing “wellbeing”.
Thatch is something that our forebears left us as one of the paths we could pursue.
We should pay our respects to that path, learn from it, and add to it.